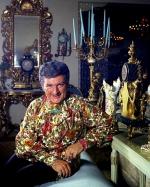 Wladziu Valentino Liberace, better known by only his last name Liberace, was a famous American entertainer and pianist. During the 1950s?1970s he was the highest-paid entertainer in the world.

Liberace, known as “Lee” to his friends and “Walter” to family, was born in West Allis, Wisconsin, a Milwaukee suburb, to Frances Zuchowska, a Pole, and Salvatore Liberace, an immigrant from Formia, Italy. He had a twin who died at birth and he was born with a caul, which in his family, as in many societies, was taken as a sign of genius and an exceptional future. Liberace’s father was a musician who played the French horn in bands and movie theaters but sometimes had to work as a factory worker or laborer. While his father encouraged music in the family, his mother was not musical and thought music lessons and a record player to be luxuries they couldn’t afford, causing angry family disputes. Liberace later stated, “My dad’s love and respect for music created in him a deep determination to give as his legacy to the world, a family of musicians dedicated to the advancement of the art”.

Liberace began playing the piano at four and while his father took them to concerts to further expose the children to music, he was also a taskmaster demanding high standards from the children in practice and performance. Liberace’s prodigious talent was in evidence early. He memorized difficult pieces by age seven. He studied the technique of the famous Polish pianist and later family friend Ignaz Paderewski and at eight, meeting him backstage at the Pabst Theater in Milwaukee. “I was intoxicated by the joy I got from the great virtuoso’s playing. My dreams were filled with fantasies of following his footsteps?Inspired and fired with ambition, I began to practice with a fervor that made my previous interest in the piano look like neglect.”

The Great Depression was hard on the family financially. The early-teenage Liberace also suffered from a speech problem and from the taunts of neighborhood children who mocked his avoidance of sports and his fondness for the piano and for cooking. Liberace focused fiercely on his piano playing and blossomed under the instruction of music teacher Florence Kelly who guided his musical development for ten years. He gained experience playing popular music in theaters, on local radio, for dancing classes, for clubs, and for weddings. He played jazz with a school group called the “Mixers” in 1934, then other groups later. Liberace also performed in cabarets and strip clubs, and even though his parents did not approve, he was earning a tidy living during hard times. For a while he adopted the stage name “Walter Busterkeys”. He also showed an interest in draftsmanship, design, and painting, and he became a fastidious dresser and follower of fashion. By now, he already showed the knack of turning his eccentricities into attention-getting virtues and he grew more popular at school, though mostly as an object of comic relief.