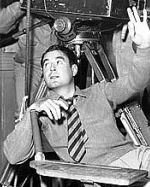 Thomas Leo McCarey was an American film director, screenwriter and producer. During his lifetime he was involved in nearly 200 movies, especially comedies. French director Jean Renoir once said that “Leo McCarey understood people better than any other Hollywood director.”

Born in Los Angeles, California, he graduated from the University of Southern California law school and began in the movie business as an assistant director to Tod Browning in 1920, but honed his skills at the Hal Roach Studios for the rest of that decade. Hired by Hal Roach in 1923, McCarey initially wrote gags for the Our Gang series and other studio stars, then produced and directed shorts, including two-reelers with Charley Chase. While at Roach, McCarey cast Stan Laurel and Oliver Hardy together and guided development of their onscreen characters, thus creating one of the most enduring comedy teams of all time. He only officially appeared as director of the duo shorts We Faw Down, Liberty and Wrong Again, but wrote many of the screenplays. By 1929, he was vice-president of production for the entire studio.

In the sound era McCarey ventured into feature-film direction, working with many of the biggest stars of the era, including Gloria Swanson, Eddie Cantor, the Marx Brothers, W.C. Fields, Mae West, and Harold Lloyd. In 1937, McCarey won his first Academy Award for Directing for The Awful Truth, with Cary Grant and Irene Dunne, a screwball comedy that launched Cary Grant’s unique screen persona, largely concocted by McCarey. As writer/director Peter Bogdanovich notes, “After The Awful Truth, when it came to light comedy, there was Cary Grant and then everyone else was an also-ran.”

McCarey was a devout Roman Catholic and deeply concerned with social issues. During the 1940s, his work became more serious and his politics more conservative. In 1944 he directed Going My Way, a story about an enterprising priest, the youthful Father Chuck O’Malley, played by Bing Crosby, for which he won his second Best Director Oscar. His share in the profits of this smash hit gave McCarey the highest reported income in the U.S. for the year 1944, and its follow-up, The Bells of St. Mary’s, which was made by McCarey’s own production company, was similarly successful.