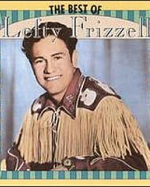 Lefty Frizzell, born William Orville Frizzell, was an American country music singer and songwriter of the 1950s, and a exponent of honky tonk music. His relaxed style of singing was an influence on later stars Merle Haggard, Willie Nelson, Roy Orbison, George Jones and John Fogerty. He is a member of the Country Music Hall of Fame.

Frizzell was born in Corsicana in east Texas, but he moved with his family shortly after his birth to El Dorado in southern Arkansas, where the Frizzells remained until the early 1940s. Frizzell began playing the guitar as a young boy. By age 12, he was appearing regularly on a children’s show at local radio station KELD-AM.

The family returned to Texas when Frizzell was still a teenager, his music career receiving a significant boost when he won a talent contest in Dallas.

Called Sonny by his family, Frizzell got the nickname Lefty at age 14 after a schoolyard scrap, although his record company falsely suggested he had won a Golden Gloves boxing match.