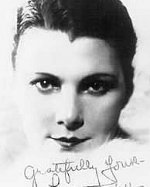 Leatrice Joy was an American actress most prolific during the early silent film era.

Born as Leatrice Joy Zeidler in New Orleans, Louisiana, she began her acting career in stock theater companies and made her film debut for the little-known small New Orleans based Nola Film Company in 1915. By 1917 she relocated to the relatively young film colony in Hollywood, California and began appearing in comedy shorts opposite Billy West and Oliver Hardy. Signed under contract with Samuel Goldwyn Studios, her first role for the studio was in 1917s The Pride of the Clan opposite Mary Pickford. By 1920, Joy’s career quickly gained momentum and she became a highly popular actress with the film-going public and was given leading lady status opposite such performers as Wallace Beery, Conrad Nagel, Nita Naldi and Irene Rich.

Joy was often cast by directors in the role of the strong-willed and independent woman, and in the liberated atmosphere of the Jazz Age Roaring Twenties solidified her public popularity, especially with women film-goers. Her close-cropped hair and somewhat boyish persona became fashionable during the era. With her increasing popularity, Joy was sought out by Cecil B. DeMille and signed to contract to Paramount Pictures in 1922 and that same year was cast in the successful high-society drama Saturday Night opposite Conrad Nagel. Joy starred in a number of successful releases for Paramount and was heavily promoted as one of DeMille’s most prominent protegés.

In 1925, against the advice of studio executives, Joy parted ways with Paramount and followed DeMille to his new film studio Producers Distributing Corporation and she made a few modestly successful films for the company, including Lois Weber’s last silent film The Angel of Broadway in 1927. A professional dispute ended the partnership with DeMille and Joy in 1928 and Joy was signed with MGM. Joy headlined MGM’s second part-talkie effort, The Bellamy Trial in 1928, opposite Betty Bronson and Margaret Livingston.