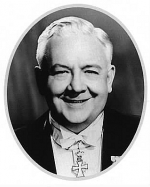 Lauritz Melchior was a Danish and later American opera singer. He was the pre-eminent Wagnerian tenor of the 1920s, 1930s, and 1940s, and has since come to be considered the quintessence of his voice type.

Born Lauritz Lebrecht Hommel Melchior in Copenhagen, Denmark, the young Melchior was a boy soprano and amateur singer before starting his first operatic vocal studies under Paul Bang at the Royal Opera School in Copenhagen at the age of 18 in 1908.

In 1913, Melchior made his debut in the baritone role of Silvio in Ruggero Leoncavallo’s Pagliacci at the Royal Theatre in Copenhagen. He sang mostly secondary baritone and bass roles for the Royal Danish Opera and provincial Scandianavian opera companies for the next few years.

One night, while on tour, Melchior helped an ailing soprano performing in Il trovatore by singing a high C in the Act IV Leonora-di Luna duet. The Azucena of that performance, the American contralto Mme Charles Cahier, was impressed by the tone she had heard and gave her young colleague sound advice: he was no baritone, but a tenor “with the lid on.” She even wrote to the Royal Opera pleading that Melchior be given a sabbatical and a stipend to restudy his voice. This he did between 1917 and 1918, taking lessons from the noted Danish tenor Vilhelm Herold who had sung Wagnerian roles in Covent Garden, Chicago and elsewhere from 1900 to 1915. This proved to be a turning point in Melchior’s career. His high baritone voice was recast into that of a low tenor, but with a strong high extension. His second debut was on 8 October, 1918 in the title role of Tannhäuser, also at the Royal Opera in Copenhagen.