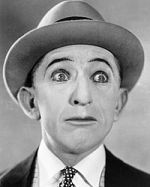 Larry Semon was an American actor, director, producer, and screenwriter during the silent film era. During that era, Semon was considered a “Comedy King”, but is now mainly remembered for working with both Stan Laurel and Oliver Hardy before they started working together.

He is also sometimes noted for directing Wizard of Oz, a 1925 silent film that had a slight influence on the more famous 1939 MGM talkie version. The compliment was repaid in the 2005 3-disc DVD version of the 1939 film, on which the 1925 version also appears along with other silent “Oz” movies.

Born in West Point, Mississippi, Semon was the son of a vaudeville magician, Zera the Great, while his mother worked as his assistant. Along with his older sister, Semon joined his parents’ act until his father’s death. After completing his education in Savannah, Georgia, Semon moved to New York where he worked for The New York Sun and later, The New York Morning Telegraph, as a cartoonist and graphic artist. While working as an artist, Semon appeared in monologues in vaudeville where he attracted the attention of Vitagraph Studios. In 1915, he was offered a contract with the company.

After signing with Vitagraph, Semon worked behind the scenes as a scenario writer, director, and film producer for actor Hughie Mack’s films. He occasionally cast himself in bit parts in the films he worked on before Mack signed on with another studio. When Mack left Vitagraph, Semon began playing the lead roles. He usually played a white-faced goof in derby hat and overalls, who would enter any given setting and cause chaos, with people being covered with debris, and property being destroyed. His short slapstick comedies were made and released quickly and prolifically, making Semon very familiar to moviegoers.