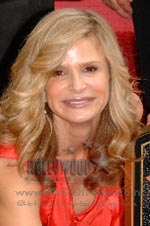 Kyra Sedgwick was honored with the 2,384th star on the Hollywood Walk of Fame. Leron Gubler, President and CEO of the Hollywood Chamber of Commerce, presided over the ceremony. Guests included Producer Lee Daniels and "The Closer" cast member G.W. Bailey.

Kyra Sedgwick was born in New York in 1965 and grew up in Manhattan. She made her professional acting debut at the age of 16 on the soap opera "Another World."

Sedgwick, whose career has included critically-acclaimed roles on stage, film and television, returns to her Golden Globe®-winning role as Deputy Chief Brenda Johnson on TNT's blockbuster series THE CLOSER which will begin its fifth season on tonight at 9 p.m. (ET/PT) on TNT. Her role as Deputy Police Chief Brenda Leigh Johnson also earned her three Emmy nominations, four SAG nominations, and a 2009 People's Choice Award for "Favorite TV Diva".

On the big screen, Sedgwick most recently appeared with Dwayne "The Rock" Johnson in the football comedy The Game Plan. She also co-starred in and co-produced the independent film Loverboy. Sedgwick's other recent big-screen credits include Cavedweller, which she developed and produced – and for which she received a 2005 Independent Spirit Award nomination for Best Actress; Nicole Kassell's award-winning The Woodsman, a dark drama co-starring Kevin Bacon that won the Jury Prize at the Deauville Film Festival, had its world premiere in competition at the Sundance Film Festival and was showcased in Cannes as part of the 2004 Director's Fortnight line-up; and Rebecca Miller's Personal Velocity, which won the Dramatic Grand Jury Prize at the 2002 Sundance Film Festival.

For television, Sedgwick co-starred opposite William H. Macy and Helen Mirren in TNT's Peabody Award-winning drama Door to Door. Other credits include Something the Lord Made, Twelfth Night (or What You Will) and Losing Chase, which she executive-produced in addition to starring opposite Mirren and Beau Bridges.

Sedgwick's theater credits include The Culture Project's New York production of The Exonerated, Nicholas Hytner's Twelfth Night at Lincoln Center, Ah Wilderness! for which she won the Theater Award, and David Mamet's Oleanna, which garnered her a Los Angeles Drama Critic's Circle Award and a Drama League Award.

Despite her very busy schedule, Sedgwick is involved and one of the board members of the NRDC-Natural Resources Defense Council- The Earth's Best Defense which is a non-profit dedicated to protecting wildlife and wild places, ensuring a safe and healthy environment for all living things.