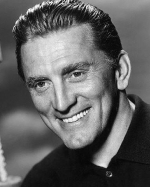 Kirk Douglas is an American actor and film producer. He is the father of Hollywood actor and producer Michael Douglas and is #17 on the American Film Institute’s list of the greatest male American screen legends of all time.

Douglas was born in Amsterdam, New York as Issur Herschelovich Danielovitch, to Bryna “Bertha” and Herschel “Harry” Demsky, a businessman. Douglas’s parents, originally surnamed Danielovitch, were Russian Jewish immigrants from Gomel, now in independent Belarus. His father’s brother, who emigrated earlier, used the surname Demsky, which Douglas’s family adopted in the United States. Beside their surname, his parents also changed their given names in the American manner, to Harry and Bertha. Douglas grew up as Izzy Demsky, although he never legally changed his name.

Coming from a poor family, as a boy, Douglas sold snacks to mill workers to earn enough to buy milk and bread. Later, he delivered newspapers and claims to have worked at more than forty jobs before becoming an actor. He found living in a family of six sisters to be stifling, “I was dying to get out. In a sense, it lit a fire under me.” During high school, he acted in school plays, and discovered “The one thing in my life that I always knew, that was always constant, was that I wanted to be an actor.”

Unable to afford tuition, Douglas talked his way into St. Lawrence University and received a loan, which he paid back by working part-time as a gardener and a janitor. He was a standout on the wrestling team, and wrestled one summer in a carnival to make money.