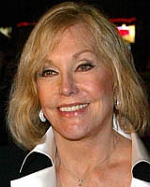 Kim Novak is an American actress. She is best known for her performance in the classic 1958 film Vertigo. Novak retired from acting in 1991 and has since become an accomplished artist of oil paintings. She currently lives with her veterinarian husband on a ranch in Eagle Point, Oregon, where they raise livestock.

Kim Novak was born Marilyn Pauline Novak in Chicago, Illinois, to Joseph Novak and Blanche Marie Novak. Her parents were second-generation Czech immigrants. Her father was a railroad clerk and former teacher and her mother was also a former teacher.

While attending Farragut High Academy, she won a scholarship to the Art Institute of Chicago. After leaving school, she began a career modeling teen fashions for a local department store. She later received a scholarship at a modeling academy and continued to model part-time. She worked as an elevator operator, a sales clerk and a dental assistant.

After a job touring the country as a spokesman for a refrigerator manufacturer, “Miss Deepfreeze,” Novak moved to Los Angeles, where she continued to find work as a model.