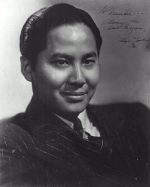 Luke was born in Guangzhou, China to a father who owned an art shop, but grew up in Seattle. He became a naturalized citizen of the United States in 1944. Before becoming an actor he was a local artist in Hollywood, and worked on several of the murals inside Grauman’s Chinese Theater. He did some of the original artwork for the 1933 King Kong pressbook. Luke also painted the casino’s mural in The Shanghai Gesture.

Luke made his film debut in The Painted Veil, and the following year gained his first big role, as Charlie Chan’s eldest son in Charlie Chan in Paris. He worked so well with Warner Oland, the actor playing Chan, that “Number One Son” became a regular character in the series, alternately helping and distracting ‘Pop’ Chan in each of his murder cases.

Keye Luke left the Charlie Chan series in 1938, shortly after Oland died. The unfinished Oland-Luke film Charlie Chan at the Ringside was completed as Mr. Moto’s Gamble, with Luke now opposite Peter Lorre.