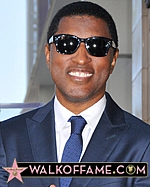 Watch the complete star ceremony at the end of this page.

If you were to closely examine the annals of modern pop music history, few creative forces have been more seminal or impacted the contemporary pop/urban genres as much as Kenny “Babyface” Edmonds. In a relatively short time, he has reached icon status as a poignant tune smith, prolific hit maker/producer, superstar recording artist, and revolutionary label owner. He is a statistical juggernaut, who keeps adding milestone after milestone to a legacy that seems to have no threshold or peak in sight.

A 10-time Grammy winner with 11 solo albums of his own, Edmonds’ impeccably crafted explorations of love, romance and relationships and has made an indelible imprint on the evolution of contemporary pop music throughout the world: more than 125 Top-10 R&B and Pop hits, 42 #1 R&B hits, and 51 Top-10 Pop hits (including 16 #1’s), which have produced single and album sales in excess of 500 million units worldwide.

Edmonds is the recipient of numerous awards, including Soul Train Music Awards, BMI Awards, NAACP Image Awards and American Music Awards.  He was also the recipient of the third BET Walk of Fame Award (previous honors were Michael Jackson and Whitney Houston), and was named BET’s “Entertainer of the Year” at the First Annual BET Awards Ceremony.

Edmonds most recent production with other artists includes Barbra Streisand, Celine Dion, Keri Hilson, Ledisi, Colbie Caillat, Jennifer Hudson and Ariana Grande.  And next up is his forthcoming duets album with Toni Braxton titled Love, Marriage & Divorce (November 25th on Motown Records).  The album’s lead single, “Hurt You,” is garnering critical raves and is already Top 10 on the Billboard charts.  The pair’s premiere performance of “Hurt You” was recently seen on October 8, on “The Tonight Show.”

Edmonds’ charitable work is as impressive as his professional accomplishments. His caring and generosity has earned him several accolades, including the Essence Award for Excellence, The City of Hope Award and Variety Magazine’s “Top of the Town” Honored Award.  He was the National Spokesman for Boarder Babies, and personally helped raise more than $500,000 for a transitional home, The Little Blue House, located in Washington D.C.  He has also personally donated more than $100,000 to the VH-1 Save the Music program and he continues to contribute to a host of other worthwhile organizations, including the United Negro College Fund (UNCF). In 2008, Edmonds combined his musical prowess with his charitable efforts, co writing and producing the song “Just Stand Up” with longtime partner Antonio “L.A.” Reid, which served as the backbone of a multi-purpose breast cancer awareness special. The song featured such current heavyweights as Beyoncé, Rihanna, Mariah Carey, Mary J. Blige, Leona Lewis, Ciara, Carrie Underwood, Sheryl Crow, and Miley Cyrus, to name a few. Edmonds and Reid were honored by the Noble Awards for their contribution to Stand Up To Cancer.  Recently Kenny has been very active in supporting Carousel of Hope, benefiting Children’s Diabetes Foundation and the Barbara Davis Center for Childhood Diabetes. 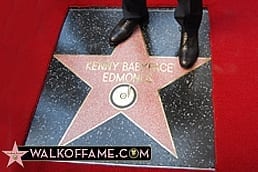