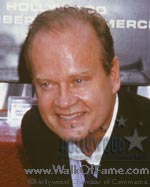 Allen Kelsey Grammer, best known as Kelsey Grammer, is an American actor and comedian. He is most widely known for his two-decade portrayal of psychiatrist Dr. Frasier Crane in the NBC sitcoms Cheers and Frasier. He has been nominated for numerous Emmys, including one for playing Frasier Crane on three sitcoms, and has also worked as a television producer, director, writer, and as a voice artist. He has received many accolades for his role as Sideshow Bob on The Simpsons.

Grammer was born in Saint Thomas, U.S. Virgin Islands to Sally, a singer, and Frank Allen Grammer, Jr., a musician and owner of a coffee shop and a bar & grill called Greer’s Place.

Grammer’s family life has been plagued by tragedies. In 1968, when Grammer was thirteen years old, his father, whom he had seen only twice since his parents’ divorce, was shot and killed on the front lawn of his home in the U.S. Virgin Islands. In 1975, his younger sister, Karen, was raped and murdered after being abducted outside a Red Lobster restaurant in Colorado Springs, Colorado, where her boyfriend worked. In 1980, his fraternal twin half-brothers were killed in a scuba diving accident. Grammer has sworn to prevent his sister’s murderer, Freddie Lee Glenn, from being paroled; in July 2009, Glenn was denied parole at least in part due to a letter Grammer submitted to the parole board.