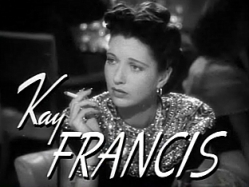 Kay Francis was an American stage and film actress. After a brief period on Broadway in the late 1920s, she moved to film and achieved her greatest success between 1930 and 1936, when she was the number one female star at the Warner Brothers studio, and the highest paid American film actress. Some of her film related material and personal papers are available to scholars and researchers in the Wesleyan University Cinema Archives.

Francis was born Katharine Edwina Gibbs in Oklahoma City, Oklahoma in 1905. Her parents, Joseph Sprague Gibbs and his actress wife Katharine Clinton Francis, were married on December 3, 1903 in New York City at the Church of the Transfiguration, and they moved to Oklahoma City the following year. But, by the time Katharine was four, her father had left.

Joseph Gibbs, who stood 6?4?, gave his daughter the gift of height?she was one of Hollywood’s tallest leading ladies in the 1930s, along with Alexis Smith and Ingrid Bergman,

While she never discouraged rumors that her mother, Katharine Gibbs, was a pioneering businesswoman who established the “Katharine Gibbs” chain of vocational schools, Francis was actually raised in the hardscrabble theatrical circuit of the period. Her mother was actually a moderately successful actress and singer, who used the stage name “Katharine Clinton.”