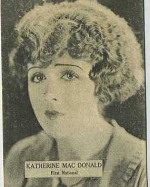 Katherine Agnew MacDonald was an American actress and film producer. She was born in Pittsburgh, Pennsylvania.

Starting her career as a popular model in New York City in the 1910s, MacDonald moved to Los Angeles in 1917. Initially signed to a contract by Paramount, MacDonald spent most of her career with First National. She achieved the peak of her popularity between 1920 and 1923 during the silent film era. She was among the top ranks of actresses financially in 1920, earning about $50,000 per picture from her contract with First National. She also became one of the first women to produce films in Hollywood. However, she was considered only a minor talent in the film industry, although her curvaceous figure resulted in the nickname of the “American Beauty”.

Her first significant role was her lead role in Shark Monroe opposite William S. Hart. She would be featured in a number of silent films, including The Squaw Man, Passion’s Playground, Beautiful Liar, Stranger than Fiction and The Infidel. Her films typically were romantic dramas. MacDonald only made two pictures after 1923; one each in 1925 and 1926.

MacDonald’s career was surrounded by controversy in her private life. She had a public feud with her sister, fellow actress Mary MacLaren. The gossip columns also held rumors of an affair with U.S. President Woodrow Wilson, which was unlikely given his poor health after his 1919 stroke.