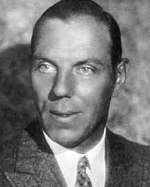 Karl Dane was a Danish comedian and actor known for his work in American films, mainly of the silent film era. He worked alongside Rudolph Valentino, John Gilbert, and King Vidor. In 1926, he teamed up with George K. Arthur to form the successful comedy duo Dane & Arthur. At the peak of his career, he was making $1500 a week.

In the 1930s, Dane was forced to quit his film career due to a nervous breakdown and trouble with his heavy accent. Unable to find work in the film industry, he eventually killed himself in 1934. His career decline and death have been cited as an example of the fate that befell many silent film stars who were unable to make the transition to sound films.

Dane was born Rasmus Karl Therkelsen Gottlieb in Turesensgade 23 in central Copenhagen, Denmark to Rasmus Carl Marius Gottlieb and Anne Cathrine Simonsen Gottlieb. He had two brothers: Reinald Marius and Viggo Eiler. His parents? marriage was apparently stormy; with his father having trouble with alcohol and money management. In 1903 Dane’s parents divorced, leaving him in the custody of his mother. His father was a glove maker by trade but enjoyed the theatre. At the turn of the century, he built a toy theatre which people began to pay to see; during this time, Dane and his brother Reinald would perform for the crowds. His father also worked as a curtain puller at the local theatre, to which his two sons accompanied him. Dane later said this would inspire him to act.

In 1900, Dane and his brother apprenticed as machinists, a job he would perform on and off throughout his life. In 1907, he began compulsory military service in the First Artillery Battalion. He was promoted to lance corporal. After being discharged from the military, he married dressmaker Carla Dagmar Hagen on September 10, 1910. The marriage produced two children: Ejlert Carl and Ingeborg Helene. With the outbreak of World War I, Dane was called back to duty. He was eventually promoted to corporal before being discharged in 1915.