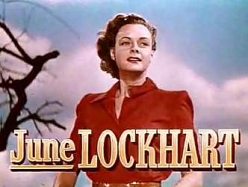 June Lockhart is an American actress, primarily in 1950s and 1960s TV, but with memorable performances on stage and in film as well. She is remembered as the mother on two TV series, Lassie and Lost in Space. She also portrayed Dr. Janet Craig on the hit CBS television sitcom Petticoat Junction from 1968-1970.

Born in New York City, Lockhart is the daughter of Canadian-born actor Gene Lockhart, who came to fame on Broadway in 1933 in Ah, Wilderness!, and English-born actress Kathleen Arthur Lockhart. She made her acting debut opposite her parents in A Christmas Carol, in 1938. She also played supporting parts in films including Meet Me in St. Louis, Sergeant York, and The Yearling. In 1946, Lockhart played the title role in She-Wolf of London.

In 1948, Lockhart won a Tony Award for Outstanding Performance by a Newcomer for her role on Broadway in For Love or Money. And in 1951, she starred in Lawrence Riley’s biographical play Kin Hubbard opposite Tom Ewell. In the late 1950s she appeared in several popular television Westerns including: Wagon Train and Cimarron City on NBC and Gunsmoke, Have Gun ? Will Travel, and Rawhide on CBS.

In 1958, she was the narrator for Playhouse 90 ‘s telecast of the George Balanchine version of Tchaikovsky’s The Nutcracker, featuring Balanchine himself as Drosselmeyer, along with the New York City Ballet.