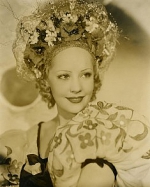 June Knight was an American Broadway and film actress.

Aged 19, she appeared in the last Ziegfeld Follies show, Hot-Cha!. She starred in the film, Broadway Melody of 1936, in which she sang a duet with actor Robert Taylor. She appeared in movies from 1930 to 1940, and on Broadway in shows such as the unsuccessful Jubilee in 1934 and Sweethearts in 1947.

She died in 1987, aged 74, from complications from a stroke and was interred in Pierce Brothers Valhalla Memorial Park.