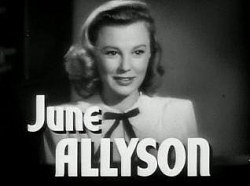 June Allyson was an American film and television actress, popular in the 1940s and 1950s. She was a major MGM contract star. Allyson won the Golden Globe Award for Best Actress for her performance in Too Young to Kiss. From 1959?1961, she hosted and occasionally starred in her own CBS anthology series, The DuPont Show with June Allyson. A later generation knew her as a spokesperson for Depend undergarments.

Allyson was born Eleanor Geisman, nicknamed “Ella”, in The Bronx, New York City, to Clara and Robert Geisman. She was raised as a Roman Catholic. Her paternal grandparents, Harry Geisman and Anna Hafner, were immigrants from Germany, although Allyson claimed her last name was originally “Van Geisman”, and was of Dutch origin. Studio biographies listed her as “Jan Allyson” born to French-English parents. On her death, her daughter said Allyson was born “Eleanor Geisman to a French mother and Dutch father.”

In April 1918, when Allyson was only six months old, her alcoholic father, who had worked as a janitor, abandoned the family. Allyson was brought up in near poverty, living with her maternal grandparents. To make ends meet, her mother worked as a telephone operator and restaurant cashier, and when she had enough funds, she would occasionally reunite with her daughter, but more often Allyson was “farmed” out to her grandparents or other relatives.

In 1925, when Allyson was eight, a dead tree branch fell on her while she was riding on her tricycle with her pet terrier in tow. The heavy branch killed her dog outright while Allyson had a fractured skull and broken back. Her doctors said she would never walk again and confined her to a heavy steel brace from neck to hips for four years. She ultimately regained her health but when Allyson had become famous, she was terrified that people would discover her background from the “tenement side of New York City” and readily agreed to studio tales of a “rosy life” including a concocted story that she underwent months of swimming exercises in rehabilitation to emerge as a star swimmer. In her later memoirs, Allyson does describe a summer program of swimming that did help her recovery.