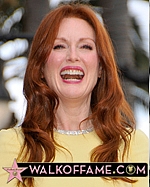 Julianne Moore Honored With Star On The Hollywood Walk Of Fame

Watch the complete Walk of Fame star ceremony at the end of this page.

The Hollywood Chamber of Commerce is pleased to announce that the beautiful Julianne Moore was honored today with a star on the Hollywood Walk of Fame on Thursday, October 3, 2013 at 11:30 a.m. PDT. “Julianne Moore has captured our hearts on the big screen with her amazing work,” said Ana Martinez, Producer of the Walk of Fame ceremonies. “She is one of the most gifted and charismatic actresses of our time and we are honored to have her immortalized on the Walk of Fame.”

Emcee Leron Gubler, President & CEO of the Hollywood Chamber of Commerce and guest speakers Chloë Grace Moretz, Joseph Gordon Levitt and Jay Roach helped Moore unveil the 2507th star at 6250 Hollywood Boulevard next to the W Hollywood in the category of Motion Pictures. The star ceremony was streamed live exclusively on www.walkoffame.com.

Actress Julianne Moore is known for her breadth of work with many memorable performances in everything from comedy to drama, blockbusters to art house fare, and from the big to the small screen.

Moore next stars in the eagerly anticipated film Carrie, a reimagining of the classic horror tale about Carrie White (Chloë Grace Moretz), a shy girl outcast by her peers and sheltered by her deeply religious mother (Julianne Moore), who unleashes telekinetic terror on her small town after being pushed too far at her senior prom.  Based on the best-selling novel by Stephen King, Carrie is directed by Kimberly Peirce and produced by Kevin Misher, with a screenplay by Lawrence D. Cohen and Roberto Aguirre-Sacasa.   Metro Goldwyn Mayer Pictures and SONY will release Carrie nationwide on October 18, 2013.

Moore currently stars alongside  Scarlett Johansen in Gordon-Levitt’s directorial debut Don Jon.   Next year she will be seen alongside Liam Neeson in Universal’s action-thriller Non-Stop out on February 28th, as President Alma Coin in Lionsgate’s popular franchise The Hunger Games:MockingJay with Jennifer Lawrence and Philip Seymour Hoffman which will release on November 24th, and opposite Jeff Bridges in the sweeping fantasy adventure The Seventh Son. She also recently wrapped production on David Cronenberg’s Maps To The Stars alongside Mia Wasikowska, Robert Pattinson and John Cusack.

Moore is the ninth person in Academy history to receive two acting Oscar nominations in the same year for her performances in Far From Heaven (Best Actress nomination) and The Hours (Best Supporting Actress nomination), after receiving many critics’ awards as well as SAG and Golden Globe nominations for both. Moore is a four-time Academy Award nominee, eight-time Golden Globe nominee, six-time SAG Award nominee, four-time BAFTA nominee, and a three-time Independent Spirit Award nominee winning in 2003 for Far From Heaven. In 2012, she won the Primetime Emmy award for Outstanding Lead Actress in a Miniseries or a Movie for her role as Alaska Governor Sarah Palin in the HBO original movie Game Change. This role also garnered wins at the 2013 SAG Awards and Golden Globe Awards. Her additional honors include the Excellence in Media Award at the 2004 GLAAD Media Awards, the Silver Bear Award at the 2003 Berlin International Film Festival, the 2002 Copa Volti as Best Actress at the Venice Film Festival, the Actor Award at the 2002 Gotham Awards and the “Tribute to Independent Vision” at the 2001 Sundance Film Festival.

After earning her B.F.A. from Boston University for the Performing Arts, Moore starred in a number of off-Broadway productions. She made her Broadway debut in 2006 in the Sam Mendes production of The Vertical Hour, an original play written by David Hare.

Moore is actively involved with Save The Children, Planned Parenthood and the Tuberous Sclerosis Alliance. 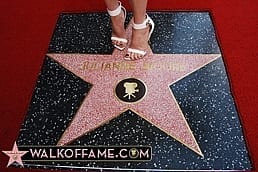