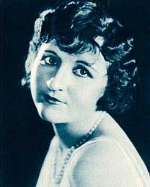 Julia Faye was a motion picture actress from Richmond, Virginia.

Faye had resided in St. Louis, Missouri prior to coming to Hollywood in 1916, to visit friends. She visited one of the film studios and was introduced to Christy Cabanne. The two reminisced about St. Louis and discovered that they had lived next door to one another there. Cabanne persuaded Faye’s reluctant mother to allow her to be in motion pictures.

She appeared in more Cecil B. DeMille movies than any other actress. She appeared in many of his silents and in every one of his movies from 1939’s Union Pacific on. She was DeMille’s mistress off-screen for quite some time and DeMille kept her employed in bit parts long after her career was over, including his most famous film, The Ten Commandments. In 1919 Faye played the stenographer in Stepping Out. Cast with Enid Bennett, Niles Welch, and Gertrude Clair, Faye was complimented by a critic for playing her