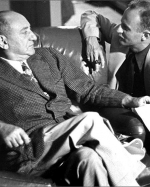 Joseph Michael Schenck was a pioneer executive who played a key role in the development of the United States film industry.

Born in Rybinsk, Yaroslavl Oblast, Russia to a Jewish household, he and his family-including younger brother Nicholas- emigrated to New York City in 1893, he and Nicholas eventually got into the entertainment business operating concessions at New York’s Fort George Amusement Park. Recognizing the potential, in 1909 the Schenck brothers purchased Palisades Amusement Park and after that became participants in the fledgling motion picture industry as partners with Marcus Loew, operating a chain of movie theaters. Through his involvement in the film business, in 1916 Joseph Schenck met and married Norma Talmadge, one of the top young stars with Vitagraph Studios.

After parting ways with his brother, Joseph Schenck moved to the West Coast where the future of the film industry seemed to lie. Within a few years the brilliant and ambitious Schenck was made the first president of the new United Artists. In 1933 he partnered with Darryl F. Zanuck to create 20th Century Pictures that merged with Fox Film Corporation in 1935. As chairman of the new 20th Century Fox he was one of the most powerful and influential people in the film business.

Caught in a payoff scheme to buy peace with the militant unions, he was convicted of income tax evasion and spent time in prison before being granted a presidential pardon. Following his release, he returned to 20th Century Fox where he became infatuated with a young actress named Marilyn Monroe and played a key role in launching her career.