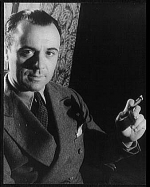 José Iturbi was a Spanish conductor, harpsichordist and pianist. He appeared in several Hollywood films of the 1940s, notably playing himself in the 1943 musical, Thousands Cheer and in the 1945 film, Anchors Aweigh. He was involved in a complex family custody battle in the 1940s that culminated in his former son-in-law kidnapping Iturbi’s two granddaughters.

Born in Valencia, Spain, of Basque descent, Iturbi studied in Barcelona and at the Valencia and Paris conservatories on scholarship; at this time, he also undertook extensive private studies in keyboard technique and interpretation with the harpsichordist Wanda Landowska. His worldwide concert tours, beginning around 1912, were brilliantly successful. He excelled as an interpreter of French as well as Spanish music. He made his American debut in New York City in 1929. He made his first appearance as a conductor in Mexico City in 1933 when presented by donon Ernesto de Quesada from Conciertos Daniel. He was also conductor of the Rochester Philharmonic Orchestra in upstate New York from 1936 to 1944. He also led the Valencia Symphony Orchestra for many years. He often appeared in concert with his sister, Amparo Iturbi, who was also a renowned pianist.

Iturbi was a noted harpsichordist, and made several short length instructional films utilizing the re-emergent early 20th C. French Pleyel et Cie pedal, metal-framed harpsichord made famous by Wanda Landowska. He appeared as an actor-performer in several filmed musicals of the 1940s, beginning with 1943’s Thousands Cheer for MGM. He usually appeared as himself in these films. He later was featured in MGM’s Anchors Aweigh, which starred Gene Kelly and Frank Sinatra, as well as several other MGM movies. In the biopic about Frédéric Chopin, A Song to Remember, Iturbi’s playing was used in the soundtrack in scenes where Cornel Wilde, as Chopin, was playing the piano.

Unfortunately, while these films made him very popular during his lifetime, his musical exhibitionism and Hollywood appearances caused many connoisseurs to undervalue him as a serious musician.