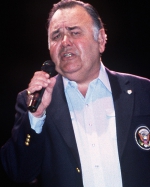 Jonathan Harshman Winters III is an American comedian and actor.

Winters was born in Bellbrook, Ohio, the son of Alice Kilgore, a radio personality, and Jonathan Harshman Winters II, an investment broker. He is a descendant of Valentine Winters, founder of the Winters National Bank in Dayton, Ohio. Winters has described his father as an alcoholic who had trouble holding a job. When he was seven, his parents separated, and Winters’ mother took him to Springfield, Ohio to live with his maternal grandmother.

At age 17, Winters joined the United States Marine Corps and served two and a half years in the Pacific Theater during World War II. Upon his return he attended Kenyon College. He later studied cartooning at Dayton Art Institute, where he met Eileen Schauder, whom he married in 1948.

Winters is a brother of the Delta Kappa Epsilon fraternity .