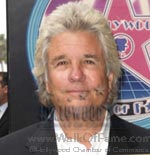 Jon Peters is an American movie producer. Peters was born John H. Peters in Van Nuys, California, the son of Helen, a receptionist, and Jack Peters, a cook. He is of Cherokee and Italian descent. Peters went into the family hair styling business and was successful on Rodeo Drive in Hollywood where he made many industry connections. Peters first gained national prominence when he began dating superstar singer and actress Barbra Streisand after designing the short wig Barbra wore for the 1974 comedy For Pete’s Sake. He then produced Streisand’s 1974 Butterfly album, from which two songs, There Won’t Be Trumpets/A Quiet Thing and God Bless the Child, were later released on her ‘Just For the Record’ box set – on the liner notes she stated that ‘no one at the record company shared my enthusiasm. They thought the songs didn’t belong on a contemporary album like Butterfly’. In 1976 he was given a controversial producing credit on Streisand’s remake of A Star Is Born. He worked with Peter Guber for the next ten years. Their hits included The Color Purple and Flashdance, and the original remake of Batman, and Rain Man. He headed Sony Pictures with Guber for two years until Guber fired him. The pair were the subject of the book Hit and Run: How Jon Peters and Peter Guber Took Sony for a Ride in Hollywood by Nancy Griffin and Kim Masters.

In November, 2008, Peters was sued for sexual harassment by his Superman: Man of Steel co-producer Brian Quintana.

In December 2008, Peters sued his past President and General Counsel, Ronald Wayne Grigg. Peters accused Grigg of a campaign of deceit that included hiring an assistant with the company’s money, stealing his computers, and drugging and raping two women on Peters’ property.

Nikke Finke’s Deadline Hollywood blog reported on a book proposal for the autobiography of Jon Peters, written by him and Los Angeles writer William Stadiem. Peter reportedly intended to write about his life with Streisand and string of other lovers including Kim Basinger, Pamela Anderson, Nicolette Sheridan, Sharon Stone, Salma Hayek and Catherine Zeta-Jones, among many other celebrities. He subsequently withdrew from the Harper Collins book deal after adverse publicity triggered by the leaking of the proposal and potential lawsuits.