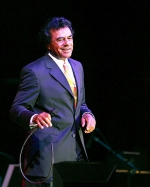 The fourth of seven children, John Royce Mathis was born on September 30, 1935 in Gilmer, Texas to Clem and Mildred Mathis. As a small boy, the family moved to Post Street in San Francisco. It was there that he learned an appreciation of music from his father who taught him his first song, “My Blue Heaven”. At age eight, his father purchased an old upright piano for $25. When he brought it home, it wouldn't fit through the front door. So that evening, Johnny stayed up all night to watch his father dismantle the piano, get it into the small living room of their basement apartment and then reassemble it. Clem Mathis, who worked briefly as a musician back in Texas playing the piano and singing on stage, would continue to teach his son many songs and routines. Johnny had proven to be the most eager of the children to learn all about music. He sang in the church choir, school functions, community events, for visitors in their home as well as amateur shows in the San Francisco area. He was also a successful track & field athlete, and was offered a chance to compete in the Olympic Trials. In the same week Columbia Records called, so he choose to go to New York to record his first album, which was released in March 1956.

Best-known for his supremely popular hits like “Chances Are," "It's Not For Me To Say," and "Misty”, Johnny has recorded more than 80 albums, 6 Christmas albums, and has sold millions of records worldwide. During his extensive career he has had 3 songs inducted into the Grammy Hall of Fame, achieved 50 Hits on Billboard’s Adult Contemporary Chart, and ranks as the all-time #6 album artist in the history of Billboard’s pop album charts.  He has received 5 Grammy Nominations, and in 2003 he was given the Lifetime Achievement Award from the Academy of Recording Arts and Sciences. In addition to all this Johnny & his music have appeared in numerous films & TV shows, including The Tonight Show, Close Encounters of the Third Kind, Family Ties, and Mad Men.

He continues to be Columbia Records longest signed recording artist.

In spite of a very busy tour schedule & many charity events, Johnny still finds time to enjoy a little free time. He was an avid tennis player until the late 1960s, when a good friend turned him on to his now life-long love of golf. He plays golf almost every day when he's not traveling and has also sung at many golf banquets such as the Ryder Cup. 2016 marks his 60th anniversary as a recording artist, so what’s next for Johnny? “I don’t think about retiring. I think about how I can keep singing for the rest of my life. I just have to pace myself.”

Mathis concentrated on romantic jazz and pop standards for the adult contemporary audience through the 1980s. Starting his career with singles of standards, Mathis became more popular as an album artist, with several dozen of his albums achieving gold or platinum status, and 73 making the Billboard charts. According to the Recording Industry Association of America, Mathis has sales of over 27 million sellers, certified units in the United States. According to recordings chart historian and music writer Paul Gambaccini, Mathis has recorded over 130 albums.

Mathis was born on September 30, 1935 in Gilmer, Texas, the fourth of seven children of Clem Mathis and his wife, Mildred Boyd. The family moved to San Francisco, California, settling in the Fillmore district where he grew up. Mathis's father had worked in vaudeville, and when he saw his son's talent, he bought an old upright piano for $25 and encouraged his efforts. Mathis began learning songs and routines from his father; his first song was "My Blue Heaven." Mathis started singing and dancing for visitors at home, and at school and church functions.

When he was 13-years-old, Connie Cox, a voice teacher, accepted Mathis as a student in exchange for work around her house. He studied with Cox for six years, learning vocal scales and exercises, voice production, classical and operatic skills. He is one of the few popular singers who received years of professional voice training that included opera. The first band Mathis would sing with was formed by fellow Merl Saunders. Mathis eulogized him in October, 2007 at his funeral to thank for giving him his first chance as a singer.