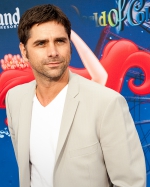 Actor/producer John Stamos continues to find success in many different areas of the entertainment world. He was most recently seen starring in NBC's Emmy Award-winning drama series "ER." Stamos played "Tony Gates," a maverick, hot-tempered, and flirtatious doctor and Gulf War veteran. His addition to the ensemble cast helped create a resurgence in ratings for one of the longest-running prime-time dramas on TV. Since joining the cast, the show reached its milestone 300th episode during it's 15th and final season.

Stamos has also enjoyed tremendous success on Broadway, most recently starring in the Tony Award-winning Nine. His Broadway debut came in 1995's How to Succeed in Business Without Really Trying and, in 2000, he starred as the Emcee in Cabaret, which was very well received.

Through his St. Amos banner, he recently produced and starred in "The Two Mr. Kissels," a Lifetime original movie based on the true story of two multimillionaire brothers who married the women of their dreams and wound up dead. He is also co-producing a feature film version of the TV Classic "The Jeffersons" for Sony. Additional producing credits include an Emmy nomination in 2000 for co-producing the ABC miniseries "Beach Boys: An American Family" and the highly-rated CBS telefilm "Martin & Lewis."

Not limiting himself to behind-the-camera work, he was recently seen in Neil Meron and Craig Zadan's Emmy and Golden Globe-nominated adaptation of "Raisin in the Sun" for ABC. He was also seen starring in the A&E original film "Wedding Wars" as a gay wedding planner who leads a nationwide strike for gay marriage rights.

His additional television film credits include "The Marriage Fool" opposite Walter Matthau and Carol Burnett. Stamos also starred in ABC's 2005 comedy "Jake in Progress." In 2001, he starred in the ABC romantic comedy "Thieves" about a pair of master thieves who become covert government agents. USA Today said of his performance, "the real revelation here is Stamos." On the big screen, he made his entry into the independent film world in the black comedy Dropping Out, which premiered at the Sundance Film Festival in 2000 and in the contemporary romantic comedy Grownups.

His recent film credits include the independent films I Am Stamos and Knots.

Stamos' career has spanned more than 25 years, beginning with the hit soap "General Hospital." He later segued to one of the most iconic family television programs playing "Uncle Jesse" on the popular ABC series "Full House."

Stamos has also displayed his musical talents over the past 20 years while touring with "The Beach Boys." John lives in Los Angeles while not performing on Broadway.