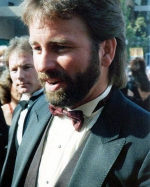 John Ritter was born in Burbank, California, the son of Dorothy Fay, an actress, and singing cowboy/matinee-star Tex Ritter. He was of German heritage. He attended Hollywood High School, where he was Student Body President. He went on to the University of Southern California, where he was a member of the Phi Gamma Delta fraternity, and majored in psychology and minored in architecture.

Ritter headlined several stage performances before he was made a star by appearing in the hit sitcom Three’s Company in 1977, playing a single ladies’ man and culinary student, Jack Tripper, who lives with two female roommates. The females originally were Janet Wood and Chrissy Snow. While in later years Janet remained, Chrissy left and other characters replaced her tenancy, including Chrissy’s cousin, Cindy, and unrelated roommate, Terri Alden. Jack pretended to be gay to keep the landlords appeased over their living arrangements. The show spent several seasons near the top of the TV ratings in the U.S. before ending in 1984. Ritter went on for one more year on the spin-off Three’s a Crowd. The original series has been seen continuously in reruns and is also available on DVD. During the run of the show, he appeared in the feature films Hero at Large, Americathon, and They All Laughed. In 1978, he played Ringo Starr’s manager on the television special Ringo, and in 1982, played the voice of Peter Dickinson in Flight of Dragons.

Before Three’s Company, he made his film debut in The Barefoot Executive with Kurt Russell and Joe Flynn. From 1972 to 1976, he made sporadic appearances as the Reverend Matthew Fordwick throughout the first five seasons of The Waltons on CBS. He played a disturbed soldier/patient in one episode of Problem Child and its first sequel. He appeared in the Oscar-winning Sling Blade and Noises Off and played the lead role in Blake Edwards’ 1989 film Skin Deep. He starred with Markie Post in the early-1990s sitcom, Hearts Afire, and in the 1980s police comedy-drama Hooperman.