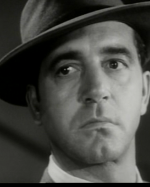 John Payne was an American film actor who is mainly remembered as a singer in 20th Century Fox musical films, as well as his leading role in Miracle on 34th Street.

Payne was born in Roanoke, Virginia. His mother, Margie Payne, graduated from the Virginia Seminary in Roanoke and became the bride of George Washington Payne, a developer of Roanoke. They lived at Ft. Lewis, an antebellum mansion that became a state historical property. It was destroyed by fire in the late 1950s. Payne went to Roanoke College then enrolled at Columbia University in the fall of 1930. He studied drama at Columbia and voice at Juilliard School. To support himself, he took on a variety of odd jobs, including wrestling and singing in vaudeville. In 1934, he was spotted by a talent scout for the Shubert theaters and was given a job as a stock player.

Payne toured with several Shubert Brothers shows, and frequently sang on New York-based radio programs. In 1936, he was offered a contract by Samuel Goldwyn, and he left New York for Hollywood. He worked for various studios until 1940, when he signed with 20th Century Fox. Fox made him a star, in 1940s musicals like Tin Pan Alley, Sun Valley Serenade, and Hello, Frisco, Hello. In these films, he was usually cast as somewhat of a supporting player in love with the likes of Sonja Henie, Betty Grable, and Alice Faye. A highlight during this period was co-starring with Gene Tierney and Tyrone Power in The Razor’s Edge. Payne’s most popular role may be in his final film for Fox, that of attorney Fred Gailey in Miracle on 34th Street. It is almost certainly his most visible role, as it typically receives frequent airplay during the Christmas season.