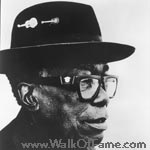 John Lee Hooker was an American blues singer-songwriter and guitarist, born near Clarksdale, Mississippi. Hooker began his life as the son of a sharecropper, William Hooker, and rose to prominence performing his own unique style of what was originally closest to Delta blues. He developed a 'talking blues' style that was his trademark. Though similar to the early Delta blues, his music was metrically free. John Lee Hooker could be said to embody his own unique genre of the blues, often incorporating the boogie-woogie piano style and a driving rhythm into his masterful and idiosyncratic blues guitar and singing. His best known songs include "Boogie Chillen" and "Boom Boom". Hooker's life experiences were chronicled by several scholars and often read like a classic case study in the racism of the music industry, although he eventually rose to prominence with memorable songs and influence on a generation of musicians.

Hooker was born on August 22, 1917 in Coahoma County, Mississippi, the youngest of the eleven children of William Hooker, a sharecropper and Baptist preacher, and Minnie Ramsey. Hooker and his siblings were home-schooled. They were permitted to listen only to religious songs, with his earliest exposure being the spirituals sung in church. In 1921, his parents separated. The next year, his mother married William Moore, a blues singer who provided Hooker with his first introduction to the guitar .