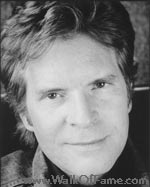 John Cameron Fogerty is an American rock singer, songwriter, and guitarist, best known for his time with the swamp rock/roots rock band Creedence Clearwater Revival and as a #1 solo recording artist. He was born in Berkeley, California and is the younger brother of the late Tom Fogerty. He attended El Cerrito High School along with the other members of CCR.

Inspired by Rock and Roll pioneers, especially Little Richard and Bo Diddley, John and his brother Tom Fogerty joined Doug Clifford and Stu Cook in the late 1950s to form the band Tommy Fogerty and the Blue Velvets in El Cerrito, California. After signing with the jazz label Fantasy in 1965, they became the Golliwogs and released a few singles that were largely ignored.

Fogerty was almost drafted in 1966, but instead he joined an Army reserve unit. He served at Fort Bragg, Fort Knox and Fort Lee. Fogerty was discharged from the Army in July 1967. In the same year, the band changed its name to Creedence Clearwater Revival.

By 1968, things started to pick up for the band. The band released its first album, the self-titled Creedence Clearwater Revival, and also had their first hit single, “Susie Q”. Many other hit singles and albums followed beginning with “Proud Mary” and the parent album Bayou Country.