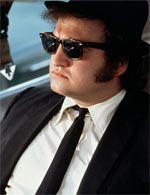 John Adam Belushi was an American comedian, actor, and musician from Albanian descent ,best known as one of the original cast members of the NBC sketch comedy show Saturday Night Live and for his roles in the films National Lampoon's Animal House and The Blues Brothers. He was the older brother of James Belushi.

Belushi was born in Chicago, Illinois, the son of Agnes Belushi, a first generation Albanian-American, and Adam Belushi, an Albanian immigrant and restaurant operator who left his native village, Qytezë, in 1934 at the age of sixteen. The family's name at the time of immigration was Bellios, or Belliors. Belushi was raised in the Albanian Orthodox church and grew up outside Chicago in Wheaton with a brother Jim, five-and-a-half years his junior. He attended Wheaton Central High School, where he met his future wife, Judy Jacklin.

Belushi's first big break as a comedian occurred in 1971, when he joined The Second City comedy troupe in Chicago. He was cast in National Lampoon's Lemmings, a parody of Woodstock, which played Off-Broadway in 1972 and also showcased future Saturday Night Live performers Chevy Chase and Christopher Guest.

In 1973, Belushi and Jacklin moved together to New York. From 1973 to 1975, National Lampoon Inc. aired The National Lampoon Radio Hour, a half-hour comedy program syndicated across the country on approximately 600 stations. Belushi was a regular player on the show. Other players included future SNL regulars Gilda Radner, Bill Murray, Brian Doyle-Murray and Chevy Chase. Jacklin became an associate producer for the show, and she and Belushi were married on December 31, 1976. A number of comic segments first performed on The Radio Hour would be translated into SNL sketches in the show's early seasons.