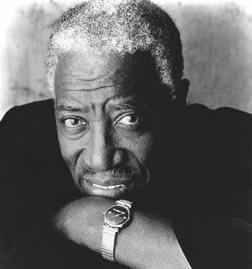 Joe Williams was a well-known jazz vocalist, a baritone singing a mixture of blues, ballads, popular songs, and jazz standards.

Williams was born Joseph Goreed in the small farming town of Cordele, Georgia. His father, Willie Goreed, left the family early on, but Williams' mother, Anne Beatrice Gilbert, who was 18 when she had her only child, provided a strong emotional bond until her death in 1968. Soon after Williams was born, his mother moved them in with her parents, who had enough money to support an extended family. During this time, Anne Gilbert was saving for a move to Chicago. Once she had made the move &mdash; alone &mdash; she began saving the money that she earned cooking for wealthy Chicagoans so that her family could join her. By the time Williams was four, he, his grandmother, and his aunt had joined his mother in Chicago, where they would live for many years.

Probably most important to Williams' later life was the music scene &mdash; fueled largely by African-American musicians &mdash; that thrived in Chicago in the early 1920s. Years later, he recalled going to the Vendóme Theatre with his mother to hear Louis Armstrong play the trumpet. Chicago also offered a host of radio stations that featured the then-rebellious sounds of jazz, exposing Williams to the stylings of Duke Ellington, Ethel Waters, Cab Calloway, Big Joe Turner, and many others. By his early teens, he had already taught himself to play piano and had formed his own gospel vocal quartet, known as "The Jubilee Boys", that sang at church functions.

During his mid-teens Williams began performing as a vocalist, singing solo at formal events with local bands. The most that he ever took home was five dollars a night, but that was enough to convince his family that he could make a living with his voice; so, at 16, he dropped out of school. After discussing it with his family, he began using the name "Williams" as a stage name, and he began marketing himself in earnest to Chicago clubs and bands. His first job was at a club called Kitty Davis's. Williams was allowed to sing with the band in the evening and keep the tips, which would sometimes amount to $20.