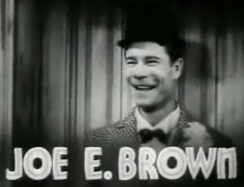 Joseph Evans Brown was an American actor and comedian, remembered for his amiable screen persona, comic timing, and enormous smile. In 1902 at the age of nine, he joined a troupe of circus tumblers known as the Five Marvellous Astons which toured the country on both the circus and vaudeville circuits. Later he became a professional baseball player. After three seasons he returned to the circus, then went into Vaudeville and finally starred on Broadway. He gradually added comedy into his act and transformed himself into a comedian. He moved to Broadway in the 1920s first appearing in the musical comedy Jim Jam Jems.

In late 1928, Brown began making films, starting the next year with Warner Bros. He quickly shot to stardom after appearing in the first all-color all-talking musical comedy On with the Show. He starred in a number of lavish Technicolor Warner Brothers musical comedies including: Sally, Hold Everything, and Song of the West. By 1931, Joe E. Brown had become such a star that his name began to appear alone above the title of the movies in which he appeared.

He followed in Fireman, Save My Child, a comedy in which he played a member of the St. Louis Cardinals, with Elmer, the Great with Patricia Ellis and Claire Dodd, and Alibi Ike with Olivia de Havilland, in both of which he portrayed ballplayers with the Chicago Cubs.

In 1933 he starred in Son of a Sailor with Jean Muir and Thelma Todd. In 1934, Brown starred in A Very Honorable Guy with Alice White and Robert Barrat, and in The Circus Clown again with Patricia Ellis and with Dorothy Burgess and with Maxine Doyle in Six-Day Bike Rider. Brown was one of the few vaudeville comedians to appear in a Shakespeare film; he played Francis Flute in the Max Reinhardt/William Dieterle film version of Shakespeare’s A Midsummer Night’s Dream, and was highly praised for his performance. The following year saw Polo Joe with Carol Hughes and Richard “Skeets” Gallagher, and Sons O’ Guns. In 1933 and 1936, he managed to become one of the top ten earners in films. He was sufficiently well known internationally by this point to be depicted in comic strips in the British comic Film Fun for twenty years from 1933.