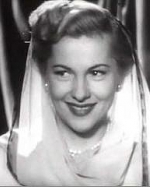 Joan Fontaine is a British American actress. Along with her older sister Olivia de Havilland, Luise Rainer, Maureen O'Hara, Gloria Stuart, Ann Rutherford, and Deanna Durbin, Fontaine is one of the last surviving leading lady stars from Hollywood of the 1930s. Fontaine is the only thespian to have won an Academy Award for a performance in a film directed by Alfred Hitchcock.

She was born Joan de Beauvoir de Havilland in Tokyo, Japan, the younger daughter of Walter Augustus de Havilland, a British patent attorney with a practice in Japan, and Lilian Augusta Ruse, a British actress known by her stage name of Lillian Fontaine. Her parents married in 1914, and were divorced in 1919.

Joan Fontaine is the younger sister of actress Olivia de Havilland, from whom she has been estranged for many decades, not speaking at all since 1975. Her paternal cousin is Sir Geoffrey de Havilland, designer of the famous de Havilland Mosquito airplane. Joan Fontaine became an American citizen in April 1943. Reportedly a sickly child who developed anemia following a combined attack of the measles and a streptococcic infection, her mother moved her and her sister to the United States upon the advice of a physician. The family settled in Saratoga, California and Joan's health improved dramatically. She was soon taking diction lessons alongside her elder sister. She attended Los Gatos High School. When she was fifteen years old, Joan returned to Japan and lived there with her father for two years.

Joan made her stage debut in the West Coast production of Call It A Day in 1935 and was soon signed to an RKO contract. In later life she appeared on Broadway in Forty Carats.