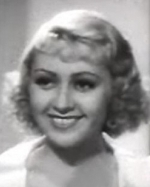 Rose Joan Blondell was an American actress. After winning a beauty pageant, Blondell embarked upon a film career. Establishing herself as a sexy wisecracking blonde, she was a Pre-code staple of Warner Brothers and appeared in more than 100 movies and television productions. She was most active in films during the 1930s, and during this time she co-starred with Glenda Farrell in nine films, in which the duo portrayed gold-diggers. Blondell continued acting for the rest of her life, often in small character roles or supporting television roles. She was nominated for an Academy Award for Best Supporting Actress for her work in The Blue Veil. Blondell was seen in featured roles in two films released shortly before her death from leukemia, Grease and the remake of The Champ. Blondell was born to a vaudeville family in New York City. Her father, known as Eddie Joan Blondell, Jr., was born in Indiana in 1866 to French parents, and was a vaudeville comedian and one of the original Katzenjammer Kids. Blondell’s mother was Kathryn Cain, born April 13, 1884, in Brooklyn of Irish American parents. Her younger sister, Gloria, also an actress, was briefly married to film producer Albert R. “Cubby” Broccoli and bears a strong resemblance to her older sister, Joan. Blondell also had a brother, the namesake of her father and grandfather. Her cradle was a property trunk as her parents moved from place to place and she made her first appearance on stage at the age of four months when she was carried on in a cradle as the daughter of Peggy Astaire in The Greatest Love.

Joan had spent six years in Australia and seen much of the world by the time her family, who had been on tour, settled in Dallas, Texas when she was a teenager. Under the name Rosebud Blondell, she won the 1926 Miss Dallas pageant and placed fourth for Miss America in Atlantic City, New Jersey, in September of that same year. She attended what is now the University of North Texas, then a teacher’s college, in Denton, where her mother was a local stage actress, and she worked as a fashion model, a circus hand, and a clerk in a New York store. Around 1927, she returned to New York, joined a stock company to become an actress, and performed on Broadway. In 1930, she starred with James Cagney in Penny Arcade.