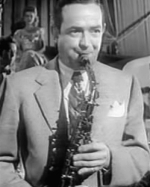 James “Jimmy” Dorsey was a prominent American jazz clarinetist, saxophonist, trumpeter, composer, and big band leader. He was known as “JD”. He composed the standards “I’m Glad There is You ” and “It’s the Dreamer in Me”.

With his brother Tommy playing trombone, he formed Dorsey?s Novelty Six, one of the first jazz bands to broadcast. In 1924 he joined the California Ramblers. He did much free lance radio and recording work throughout the 1920s. The brothers also appeared as session musicians on many jazz recordings. He joined Ted Lewis’s band in 1930, with whom he toured Europe.

After returning to the United States, he worked briefly with Rudy Vallee and several other bandleaders, in addition to the Dorsey Brothers Orchestra with Tommy. He appeared on at least seventy-five radio broadcasts, as a member of Nathaniel Shilkret’s orchestra on programs such as the 1932 program, “The Music That Satisfies,” also known as the Chesterfield Quarter Hour. Tommy broke off to form his own band in 1935 after a musical dispute with Jimmy. The Dorsey Brothers Orchestra became the Jimmy Dorsey Orchestra, and included musicians such as Bobby Byrne, Ray McKinley, and Skeets Herfurt along with vocalists Bob Eberly and Kay Weber.