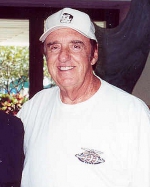 James Thurston "Jim" Nabors is an American actor and singer. Born and raised in Sylacauga, Alabama, Nabors moved to Southern California due to his asthma. While working at a Santa Monica nightclub, The Horn, he was discovered by Andy Griffith and consequently joined The Andy Griffith Show, playing Gomer Pyle, a dim-witted gas station attendant. The character proved popular, and Nabors was given his own spin-off show, Gomer Pyle, U.S.M.C.

Though best known for his portrayal of Gomer Pyle, Nabors became a popular guest on variety shows in the 1960s and 1970s after revealing a rich baritone voice. He subsequently recorded numerous albums and singles, most of them containing romantic ballads.

Nabors was born to Mavis and Fred Nabors in Sylacauga, Alabama, where he sang for his high school and church. He attended the University of Alabama, where he began acting in skits. After graduating, he moved to New York, where he worked as a typist for the United Nations; after a year, he moved to Chattanooga, Tennessee, where he got his first job in the television industry as a film cutter. Due to his asthma, he moved to Los Angeles and worked as a film cutter for NBC. He moonlighted at a Santa Monica tavern, The Horn, singing and acting in cabaret theater. His act featured him as a character similar to the Gomer Pyle character he would later portray: he would sing in a baritone and sometimes his higher-pitched voices and speak in a higher-pitched voice. At the club, comedian Bill Dana saw Nabors' act and invited him to appear on The Steve Allen Show. Nabors signed on to the show, but it was soon canceled.

It was at The Horn where Nabors was discovered by Andy Griffith and was hired to play a one-shot role of Gomer Pyle, an "" gas station attendant, on The Andy Griffith Show. Nabors's character became so popular that he was made a regular on the show and was later given his own show, the spin-off Gomer Pyle, U.S.M.C., in which his character joined the United States Marine Corps. The show, which placed Nabors's "bumbling" and "naive" character opposite Sergeant Vince Carter, also proved popular. Despite its airing during the Vietnam War, a time of "profound disillusionment with war and the military", Gomer Pyle remained popular because it avoided war-related themes and instead focused on the show's rural roots and the relationship between Pyle and Sgt. Carter. Nabors quit Gomer Pyle after five seasons because he desired to move to something else, 'reach for another rung on the ladder, either up or down'.