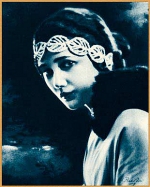 Jetta Goudal was a Dutch-born American actress, successful in Hollywood films of the silent film era.

Goudal was born as Juliette Henriette Goudeket in 1891, daughter of Mozes Goudeket, a wealthy, Orthodox Jewish diamond cutter in Amsterdam, and Geertruida Warradijn. Tall and regal in appearance, she began her acting career on stage, traveling across Europe with various theater companies.

In 1918, she left World War I-era devastated Europe to settle in New York City in the United States, where she hid her Dutch and Jewish ancestry, generally describing herself as a “Parisienne” and on an information sheet for the Paramount Public Department she wrote that she was born at Versailles on July 12, 1901, the daughter of a fictional Maurice Guillaume Goudal, a lawyer.

She first appeared on Broadway in 1921, using the stage name Jetta Goudal. After meeting director Sidney Olcott, who encouraged her venture into film acting, she accepted a bit part in his 1922 film production Timothy’s Quest. Convinced to move to the West Coast, Goudal appeared in two more Olcott films in the ensuing three years.