In memory of Hollywood newscaster and Walk of Famer Jess Marlow, flowers were placed today on his star on the Hollywood Walk of Fame on Monday, August 4, 2014 at 2 p.m. PST. The star in the category of Radio is located at 6420 Hollywood Boulevard. “Rest in Peace among the stars, Jess Marlow!” The card was signed on behalf of the Hollywood Historic Trust and the Hollywood Chamber of Commerce.

Myron Jess Marlow is a retired Los Angeles television newsman. He hails from Salem, IL and was an anchor at KNTV-TV, KNBC-TV and KCBS-TV for over 40 years, beginning in the late 1950s. As an anchor, Marlow also delivered commentaries for KNBC and hosted the station's public affairs program "News Conference", He also filed reports from Vietnam and the Soviet Union.

He retired in 1997, but returned to host "Life & Times", a Southern California public affairs program on KCET-TV in 2001 until he officially retired in 2003. His plan was to move to Santa Fe, New Mexico.

During his 37 years in Los Angeles, which began in 1966, he won numerous awards, including an Emmy and a star on the Hollywood Walk of Fame on 14 May 1999, located at 6420 Hollywood Blvd. 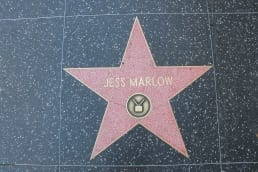