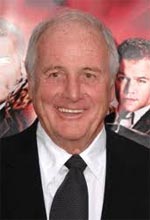 Jerry Weintraub is an American film producer and former chairman and CEO of United Artists. He now lives in Palm Desert, California.

Weintraub was born in Brooklyn and raised in The Bronx, New York, the son of Rose and Sam Weintraub. His father was a gem dealer. After several years at MCA, he left and formed his own personal management company. In the 1960s, he also co-founded the vocal group The Doodletown Pipers. Among the acts that Weintraub managed at this time were Joey Bishop, The Four Seasons, and singer Jane Morgan. His relationship with Morgan went from professional to personal and the two were married in 1965. They have four children together. For the past 20 years, however, Weintraub has been living with girlfriend Susie Elkins. Morgan and Weintraub never divorced and have remained friends.

Before turning to films, Weintraub’s largest entertainment success was as the personal manager of singer and actor John Denver whom he signed in 1970. When John Denver ended his business relationship due to Weintraub’s focus on other projects, Weintraub threw John out of his office and called John Denver a Nazi. John Denver would later write in his autobiography “. I’d bend my principles to support something he wanted of me. And of course every time you bend your principles – whether because you don’t want to worry about it, or because you’re afraid to stand up for fear of what you might lose – you sell your soul to the devil”.