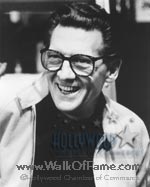 Jerry Lee Lewis is an American rock and roll and country music singer and pianist. An early pioneer of rock and roll music, his career faltered after Lewis married his young cousin, and he afterwards made a transition to country music.

Lewis was born to the poor family of Elmo and Mamie Lewis in Ferriday in Concordia Parish in eastern Louisiana, and began playing piano in his youth with his two cousins, Mickey Gilley and Jimmy Swaggart. His parents mortgaged their farm to buy him a piano. Influenced by a piano-playing older cousin Carl McVoy, the radio, and the sounds from the black juke joint across the tracks, Haney’s Big House, Lewis created his style from black artists who were unable to play to white audiences, mixing rhythm and blues, boogie-woogie, gospel, and country music, as well as ideas from established “country boogie” pianists like recording artists Moon Mullican and Merrill Moore. Soon he was playing professionally.

His mother enrolled him in Southwest Bible Institute in Waxahachie, Texas, secure in the knowledge that her son would now be exclusively singing his songs to the Lord. But Lewis daringly played a boogie woogie rendition of “My God Is Real” at a church assembly that sent him packing the same night. Pearry Green, then president of the student body, related how during a talent show Lewis played some “worldly” music. The next morning, the dean of the school called both Lewis and Green into his office to expel them both. Lewis said that Green shouldn’t be expelled because “he didn’t know what I was going to do.” Years later Green asked Lewis: “Are you still playing the devil’s music?” Lewis replied “Yes, I am. But you know it’s strange, the same music that they kicked me out of school for is the same kind of music they play in their churches today. The difference is, I know I am playing for the devil and they don’t.”