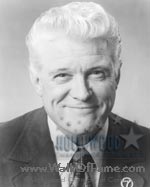 Jerry Dunphy was an American television news anchor in the Los Angeles/Southern California media market. He was best known for his catchy intro “From the desert to the sea, to all of Southern California, a good evening.”

After serving as a pilot in World War II, Dunphy began his broadcast television career in 1953. He was the news director/anchor at then-CBS owned-and-operated WXIX in Milwaukee. Dunphy also was a sports reporter at another CBS O&O, WBBM-TV, in Chicago. Then in 1960, Dunphy took over the anchor chair at the Los Angeles CBS O&O station KNXT, where he anchored Los Angeles’ most popular newscast later titled “The Big News”, a program that often attracted a quarter of Los Angeles television owners, ratings unheard of in the market. He was still popular when fired in 1975, yet KNXT sought to adopt a faster paced, “Eyewitness News” type format. It was then when Jerry joined KABC-TV, bringing it to the top of the ratings, making it Southern California’s news leader. Since Dunphy’s unceremonious firing, Channel 2 has never recovered in the ratings. Dunphy left KABC-TV in 1989 and joined the upstart KCAL-TV as one of the pioneering anchors of the three-hour primetime news format, “Prime 9 News”. He returned to KCBS-TV in 1995 and remained until 1997 as an anchorman, and rejoined KCAL-TV in 1997, where he remained until his death.

Dunphy was one of the first newscasters to interview President Richard Nixon after his resignation in 1974. He would later sit down with Ronald Reagan, Jimmy Carter, and Gerald Ford. Dunphy also performed regular cameos in L.A.-based films including Night of the Lepus, Oh God!, Short Cuts, The Jerky Boys and Independence Day, and is considered to be the inspiration for two fictional television characters: Kent Brockman on The Simpsons, and Ted Baxter on The Mary Tyler Moore Show.

Dunphy was also a songwriter. One of his songs was called, appropriately, “From the Desert to the Sea” and was recorded by country music star TG Shepherd