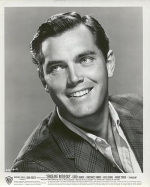 Jeffrey Hunter was an American film and television actor.

Hunter was born Henry Herman McKinnies, Jr., in New Orleans, Louisiana, but raised after 1930 in Milwaukee, Wisconsin, where he graduated from Whitefish Bay High School. He began acting in local theater and radio in his early teens. He served in the United States Navy, in World War II, then studied theatre at Northwestern University, 1946?1949.

In 1950, while a graduate student in radio at the University of California, Los Angeles and appearing in a college play, he was spotted by talent scouts and offered a two-year motion picture contract by 20th Century-Fox that was eventually extended to 1959. He made his Hollywood debut in Fourteen Hours, had star billing by Red Skies of Montana, and first billing in Sailor of the King. A loan-out to co-star with John Wayne in the title roles of the now-classic western The Searchers began the first of three pictures he made with director John Ford; the other two being The Last Hurrah and Sergeant Rutledge .