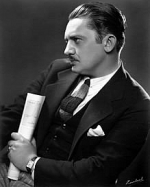 Jean Hersholt was a Danish-born actor who lived in the United States, where he was a leading film and radio talent, best known for his 17 years starring on radio in Dr. Christian and for playing Shirley Temple’s grandfather in Heidi. Asked how to pronounce his name, he told The Literary Digest, “In English, her’sholt; in Danish, hairs’hult.” Of his total credits, 75 were silent films and 65 were sound films. He appeared in 140 films and directed four.

Born in Copenhagen, Denmark to a well-known Danish stage family, Hersholt toured Europe performing with his family when he was young. He then graduated from the Copenhagen Art School. His first two films were made in Germany in 1906. He emigrated to the US in 1913, and the remainder of his movies were made in America.

Hersholt’s best remembered film roles included Marcus Schouler in Erich von Stroheim’s 1924 in Greed and Shirley Temple’s beloved grandfather in the 1937 film version of the 1880 children’s book, Heidi, written by Swiss author Johanna Spyri. During his long career in the movies, his roles ran the gamut from early silent villains to secondary parts in which his mild Danish accent and pleasant voice suited him to depict a succession of benevolent fathers, doctors, professors and European noblemen. Hersholt’s last role was in the 1955 movie Run for Cover.

In The Country Doctor, a movie starring the Dionne quintuplets, Hersholt portrayed Dr. John Luke, a character based on Dr. Allan Roy Dafoe, the Canadian obstetrician who delivered and cared for the Dionne Quintuplets. Two sequels followed. Hersholt wanted to do the role on radio but could not get the rights. He decided to create his own doctor character for radio, and since he was a Hans Christian Andersen enthusiast, he borrowed that name for his character of the philosophical Dr. Paul Christian who practiced in the Midwest town of River’s End with the assistance of Nurse Judy Price. With the opening theme music of “Rainbow on the River”, Dr. Christian was introduced on CBS on November 7, 1937 on The Vaseline Program, aka Dr. Christian’s Office and later Dr. Christian, sponsored by Chesebrough Manufacturing’s Vaseline.