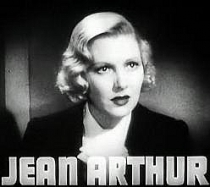 Jean Arthur was an American actress and a major film star of the 1930s and 1940s. She remains arguably the epitome of the female screwball comedy actress. As James Harvey wrote in his recounting of the era, “No one was more closely identified with the screwball comedy than Jean Arthur. So much was she part of it, so much was her star personality defined by it, that the screwball style itself seems almost unimaginable without her.” Arthur has been called “the quintessential comedic leading lady.”

Arthur is best known for her feature roles in three Frank Capra films: Mr. Deeds Goes to Town, You Can’t Take It With You, and Mr. Smith Goes to Washington, films that championed the everyday heroine. A memorable later performance was in George Stevens’ Shane, her last screen appearance.

Arthur was nominated for an Academy Award for Best Actress in 1944 for her performance in The More the Merrier. Arthur was born Gladys Georgianna Greene in Plattsburgh, New York to Protestant parents Johanna Augusta Nelson and Hubert Sidney Greene. She lived off and on in Westbrook, Maine from 1908 to 1915 while her father worked at Lamson Studios in Portland, Maine as a photographer. The product of a nomadic childhood, Arthur also lived at times in Jacksonville, Florida; Schenectady, New York; and, during a portion of her high school years, in the Washington Heights neighborhood of upper Manhattan. She came from a family of three older brothers: Donald Hubert, Robert B. and Albert Sidney. Her maternal grandparents were immigrants from Norway who settled in the American West. She reputedly took her stage name from two of her greatest heroes, Joan of Arc and King Arthur.