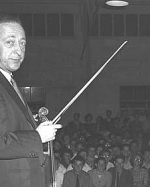 Jascha Heifetz was a violin virtuoso born in Vilnius. He is widely regarded as one of the greatest violinists of all time, and was called “The Violinist of the Century” by RCA Victor, the company for whom he recorded.

Heifetz was born into a Jewish family in Vilnius, Lithuania, then part of the Russian Empire. The record confirming his birth on January 20, 1901 is held at the Lithuanian State Historical Archives. The full archival citation is LVIA/728/4/77. A copy of the record is held on microfilm at the LDS in Salt Lake City. The LDS film is 2205068, the image number is 795. The record states the family was registered in Polotzk. His father, Reuven Heifetz, son of Elie, was a local violin teacher and served as the concertmaster of the Vilnius Theatre Orchestra for one season before the theatre closed down. Jascha took up the violin when he was three years old and his father was his first teacher. At five he started lessons with Ilya D. Malkin, a former pupil of Leopold Auer. He was a child prodigy, making his public debut at seven, in Kovno playing the Violin Concerto in E minor by Felix Mendelssohn. In 1910 he entered the Saint Petersburg Conservatory to study under Leopold Auer himself.

He played in Germany and Scandinavia, and met Fritz Kreisler for the first time in a Berlin private house together with other noted violinists in attendance. Kreisler, after accompanying the 12-year-old Heifetz at the piano in a performance of the Mendelssohn concerto, said to all present, “We may as well break our fiddles across our knees.” Heifetz visited much of Europe while still in his teens. In April 1911, Heifetz performed in an outdoor concert in St. Petersburg before 25,000 spectators; there was such a sensational reaction that police officers needed to protect the young violinist after the concert. In 1914, Heifetz performed with the Berlin Philharmonic conducted by Arthur Nikisch. The conductor was very impressed, saying he had never heard such an excellent violinist.

On October 27, 1917, Heifetz played for the first time in the United States, at Carnegie Hall in New York, and became an immediate sensation. Fellow violinist Mischa Elman in the audience asked “Do you think it’s hot in here?”, whereupon Leopold Godowsky, in the next seat, imperturbably replied, “Not for pianists.”