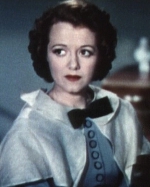 Janet Gaynor was an American actress. One of the most popular actresses of the silent film era, in 1928 Gaynor became the first winner of the Academy Award for Best Actress for her performances in three films: Seventh Heaven, ‘ and Street Angel. This was the only occasion on which an actress has won for multiple roles. This rule would be changed three years later by AMPAS. Her career continued with the advent of sound film, and she achieved a notable success in the original version of A Star Is Born. She worked only sporadically after the late 1930s. Severely injured in a 1982 vehicle collision, the incident contributed to her death two years later.

Born Laura Augusta Gainor‘ in Philadelphia, Pennsylvania, her family moved west to San Francisco during her childhood. When she graduated from high school in 1923, Gaynor decided to pursue an acting career. She moved to Los Angeles, where she supported herself working in a shoe store, receiving $18 per week. She managed to land unbilled small parts in several feature films and comedy shorts for two years. Finally, in 1926, at the age of 20, she was cast in the lead role in The Johnstown Flood”, the same year she was selected as one of the WAMPAS Baby Stars. Her outstanding performance won her the attention of producers, who cast her in a series of films.