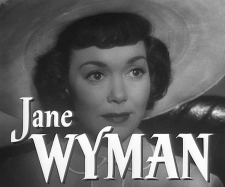 Jane Wyman was an American singer, dancer, and character actress of film and television. She began her film career in the 1930s, and was a prolific performer for two decades. She received an Academy Award for Best Actress for her performance in Johnny Belinda, and later achieved success during the 1980s for her leading role in the television series Falcon Crest.

Wyman was the first wife of Ronald Reagan, marrying him in 1940 and divorcing him in 1948, long before he ran for any public office. To date, she is the only woman to have been an ex-wife of a U.S. president, and Ronald Reagan is the only divorced person to hold the office of the President of the United States.

Wyman was born Sarah Jane Mayfield in St. Joseph, Missouri. Although her birthdate has been widely reported for many years as January 4, 1914, research by biographers and genealogists indicates that she was born on January 5, 1917. The most likely reason for the 1914 date is that she added to her age when beginning her career as a minor, so that she could work. After Wyman’s death, a release posted on her official website confirmed these details.

Her parents were Manning Jefferies Mayfield, a meal-company laborer, and Hope Christian, a doctor’s stenographer and office assistant. In October 1921, her mother filed for divorce, and her father died unexpectedly the following year at age 27. After her father’s death, her mother moved to Cleveland, Ohio, leaving her to be reared by foster parents, Emma and Richard D. Fulks, the chief of detectives in Saint Joseph. She took their surname unofficially, including in her school records and, apparently, her first marriage certificate.