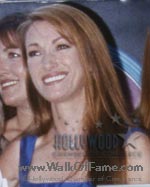 Jane Seymour, OBE is an English actress, best-known as a Bond girl, in the 1973 James Bond film, Live and Let Die, and the star of the 1990s American television series, Dr. Quinn, Medicine Woman, and its telefilm sequels.

Seymour was born Joyce Penelope Wilhelmina Frankenberg in Hayes, Middlesex, England, the daughter of Mieke, a nurse, and John Benjamin Frankenberg, an obstetrician. Her father was an English Jew whose family was from Poland, and her mother was a Dutch-born Protestant who was a prisoner of war during WWII. Seymour was educated at the independent The Arts Educational School in Tring, Hertfordshire, in England. She took on the stage name “Jane Seymour”, also the name of King Henry VIII’s third wife, at the age of 17.

Seymour has had a long acting career in both film and television, beginning in 1969 with an uncredited role in Richard Attenborough’s film version of Oh! What a Lovely War. Soon afterward, she married Attenborough’s son, Michael Attenborough. Her first major film role was as Lillian Stein, a Jewish woman seeking shelter from the Nazis, with a Danish family, in the 1970 war drama The Only Way.

From 1972 to 1973, she gained her first major TV role, as Emma Callon in the successful 1970s series The Onedin Line. During this time, she appeared as female lead Prima in the two-part TV mini-series Frankenstein: The True Story, and as Winston Churchill’s lover Pamela Plowden, in another of the films, produced by her father-in-law, Young Winston. She also drew her first major international attention, as Bond girl Solitaire in the 1973 James Bond film, Live and Let Die. IGN ranked her as 10th in a Top 10 Bond Babes list.