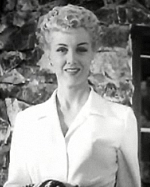 Jan Sterling was an American actress. Most active in films during the 1950s, Sterling received a Golden Globe Award for Best Supporting Actress for her performance in The High and the Mighty, and was nominated for an Academy Award for Best Supporting Actress for the same performance. Her career declined during the 1960s, however she continued to play occasional roles for television and theatre.

Sterling was born Jane Sterling Adriance in New York City, into a well-to-do family. She was educated in private schools before heading to Europe with her family. She was schooled by private tutors in London and Paris, and was enrolled in Fay Compton’s dramatic school in London.

As a teenager she returned to Manhattan, and using variations of her given name, such as Jane Adriance and Jane Sterling, began her career by making a Broadway appearance in Bachelor Born, and went on to appear in such major stage works as Panama Hattie, Over 21 and Present Laughter. In 1947, she made her film debut in Tycoon, billed as Jane Darian. Ruth Gordon reportedly insisted she change her stage name and they agreed upon Jan Sterling.

She played a prominent supporting role in Johnny Belinda. Alternating between films and television, Sterling appeared in several television anthology series during the 1950s, and played film roles in Caged, Mystery Street, The Mating Season, Ace in the Hole, Flesh and Fury, The Human Jungle, and Female on the Beach .